Virgil Partch and Nuts Rising
plus the Eyes of AutoDrive, Libraries, & Core 'Stablized'

Universal truths can be applied to many situations for better understandings.

One universal truth is the mixed nut theory, in which the biggest nuts end up on the top. Brazil nuts shake out to be on top of pecans, cashews, and peanuts. Simple idea, tons of applications.

It helps explain dictatorships and big business, some aspects of liquifaction during earthquakes, breakfast cereal, and many other things large and small.

Open a box of corn flakes and the biggest flakes end up on top. 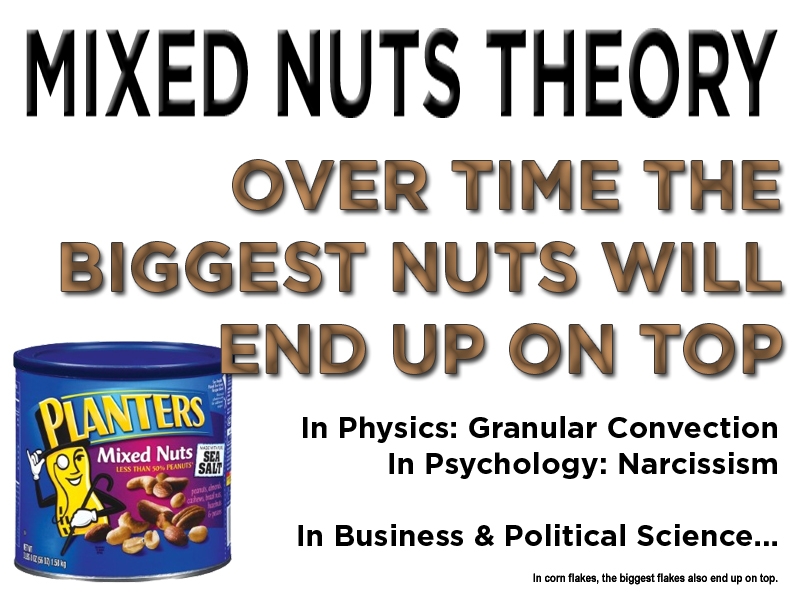 Libraries Are For Everyone
February 18, 2017

Some posters have been appearing in U.S. libraries emphasizing that “Libraries Are For Everyone.” Here are some of the posters:

Apparently, Russia can do anything they damn well please under the Trump administration:
•  A Russian ship, the SSV-175 Viktor Leonov, is spying 30 miles off the coast of the U.S. Naval Submarine Base in Groton, Connecticut. (February 15th)
•  Multiple Russian aircraft buzzed a U.S. destroyer, USS Porter: an Il-38 sub-hunting quad-engine aircraft, two Su-24 fighter-bomber jets, and then a single Su-24. (February 10th)
•  Russia deployed two sets of intermediate-range missiles, SSC-8, in violation of the 1987 INF treaty that bans intermediate-range missiles based on land. (February 14th)

Revelations related to the Trump administration's cozy relationship with Russia led to Trump firing his national security adviser, Michael Flynn, late on February 13th. Flynn was fired for lying to the president and vice-president about his Dominican-Republic phone call with Sergey Kislyak, Russia's ambassador to the United States, on December 29th. Other Trump campaign advisers under investigation for Russian-links include Paul Manafort, Carter Page, and Roger Stone.

July 2016 was a very eventful month tying the Trump campaign to Russia. Trump changed only one item of the RNC platform, softening the stance on the Russian invasion of the Crimea (July 18, 2016). Then four days later, Democratic party e-mails hacked by Russia were sent to Wikileaks (July 22, 2016). Five days later at Donald Trump's last press conference before the election, Trump said he would consider lifting sanctions on Russia and instructed Russia to continue to hack Hillary Clinton (July 27, 2016).

Love is not a destination. Love is a journey. It is wonderment and joy, hope and sometimes pain.

“Life is pain, Highness. Anyone who says otherwise is selling something.” - Dread Pirate Roberts (Princess Bride)

Love is an exchange. It takes giving; it takes work on both sides. It's tough... and rewarding, but there are no trophies (wives or husbands). Anniversaries are hardly a measure of love. Sacrifice can be a measure of love. But true love is immeasurable. 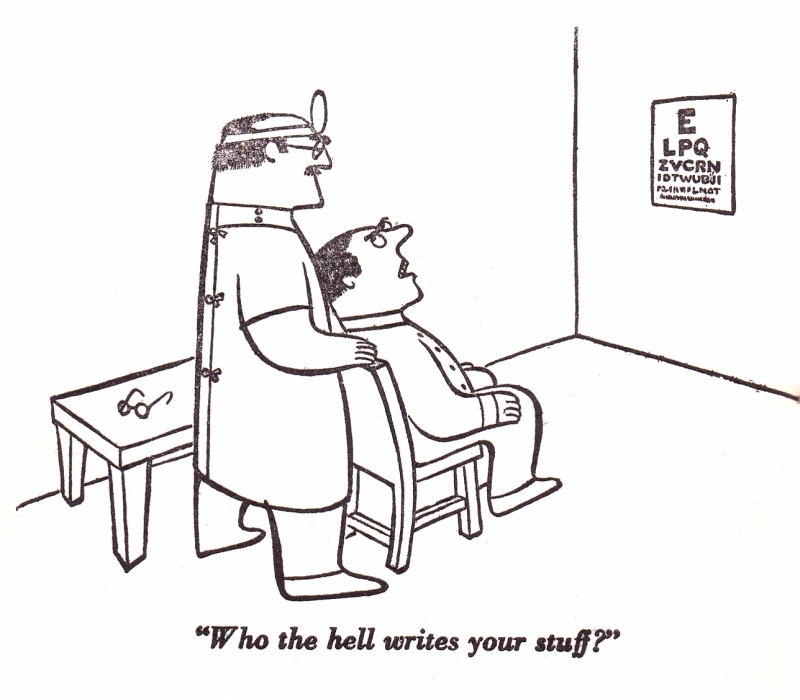 Page 22 from It's Hot In Here (1945, out-of-print) by Collier's magazine cartoonist Virgil Partch.


The core problem of nuclear power is spelling.

If you fix the core, it might be stabilized, but not if the computer spells stabilized as if Liz has been stabbed: S-T-A-B-L-I-Z-E-D. 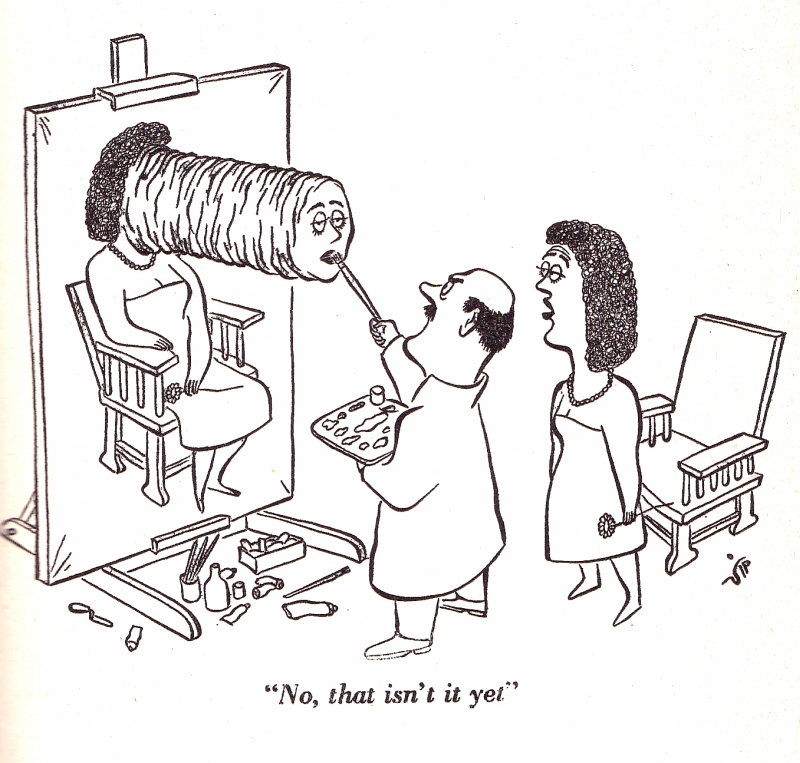 Page 53 from It's Hot In Here (1945, out-of-print) by Collier's magazine cartoonist Virgil Partch.


Art and writing are the perseverence of quality over rough work.

Creative endeavors take time. Life itself is a do over. Virgil Partch understood.
Music Associations: Climax - Couldn't Get It Right & John Lennon - Starting Over 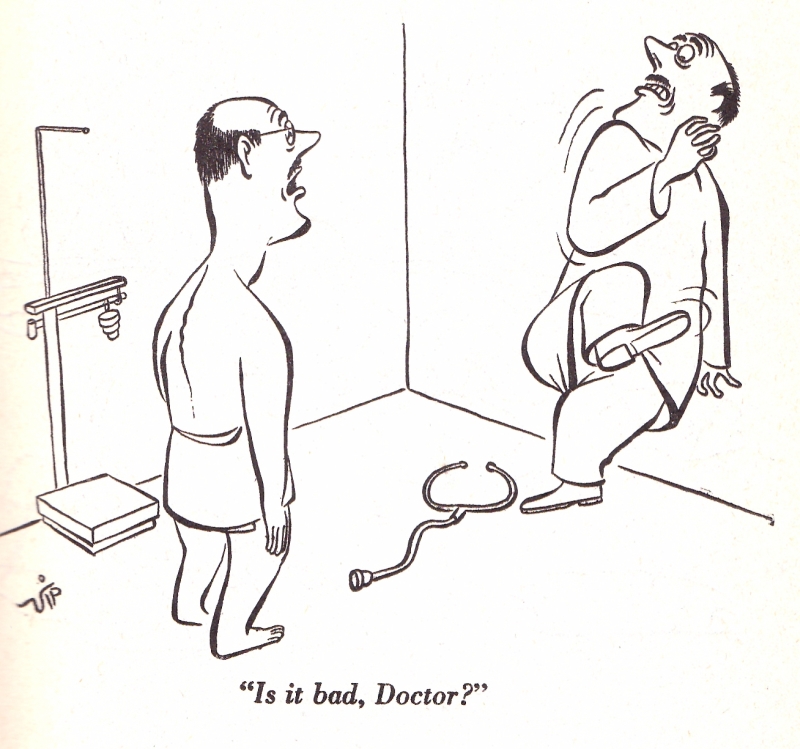 Page 17 from It's Hot In Here (1945, out-of-print) by Collier's magazine cartoonist Virgil Partch.


Virgil Partch drew funny looking people. He drew large heads. Readers must have been curious about who these big headed people were because the editors at Collier's pressured Partch to create ongoing characters. Partch's ongoing character was named Big-Head George.

Partch bodies were less important, legs were an after-thought. Feet and shoes looked like ice skates.

His cartoons were like balcony views of people. It's as if we're looking down into a special little world.

A print advertising trick from the mid-20th century was to tilt the product -- like a cereal box -- as if it's seconds away from sliding into the viewer's lap. Partch's people were on the verge of falling off the page.

I think of the cartoon world as being either pre-Partch or post-Partch. In the post-Partch world, Charles Schultz drew Charlie Brown, with a big head, small body, and uncomplicated shoes. The Schultz-drawn viewer's angle of Peanuts characters was from the side, at the character's level, not above like Partch's work.

And don't get me started about Fred Flintstone.
Music Association: Paul Simon - Call Me Al  “Don't want to end up a cartoon in a cartoon graveyard.”


By the Numbers
President Bannon-Trump
January 30, 2017 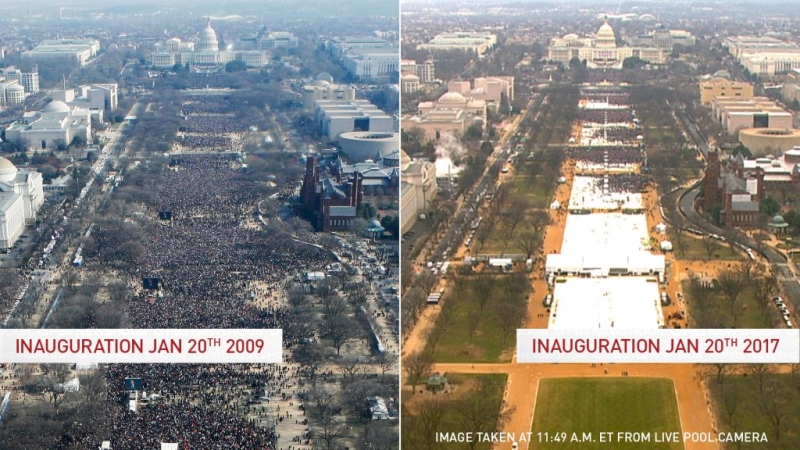 The President (Bannon-Trump) lost the popular vote by the largest margin in United States history. Only four other times in U.S. history did a president lose the popular vote, while still becoming president (1824, 1876, 1888, & 2000). The margin of victory in the electoral college was 0.13 or the 56.5% with 304 electoral votes out of 538 (45 elections had higher margins and percentages). Steve Bannon is registered to vote in both New York and Florida.

The approval rating for the incoming President was lowest in the history of Gallup polling. And the disapproval rating was by far the highest for an incoming president at 45% disapproval. But it has gone downhill in record time. As of January 30th, a majority of Americans (51%) disapproved of the new President, the first Russian puppet.

A boycott of Trump products is changing the bottom line through Grab Your Wallet (spreadsheet), (#GrabYourWallet, #BoycottIvanka).

Trump, 70, is the oldest person to become president. His medications include Propecia, a prostate-related drug to stop hair loss (with sexual dysfunction side effects), Crestor (rosuvastatin) for elevated cholesterol, antibiotics to control rosacea, and a daily baby aspirin for heart attacks (are pain-killers also empathy-killers?). Dr. Harold N. Bornstein told the New York Times, that co-president Trump “has all his hair,” which is an alternative truth since his comb-over comes from the drug Propecia (Finasteride) and the Kraft cheese color comes from hair dye (Pantone 458) held in place with ozone-depleting “CHI Helmet Head” hair spray. 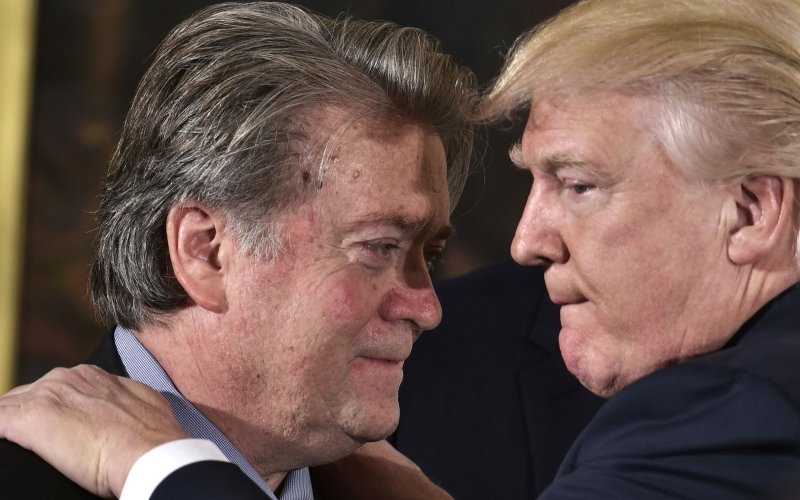 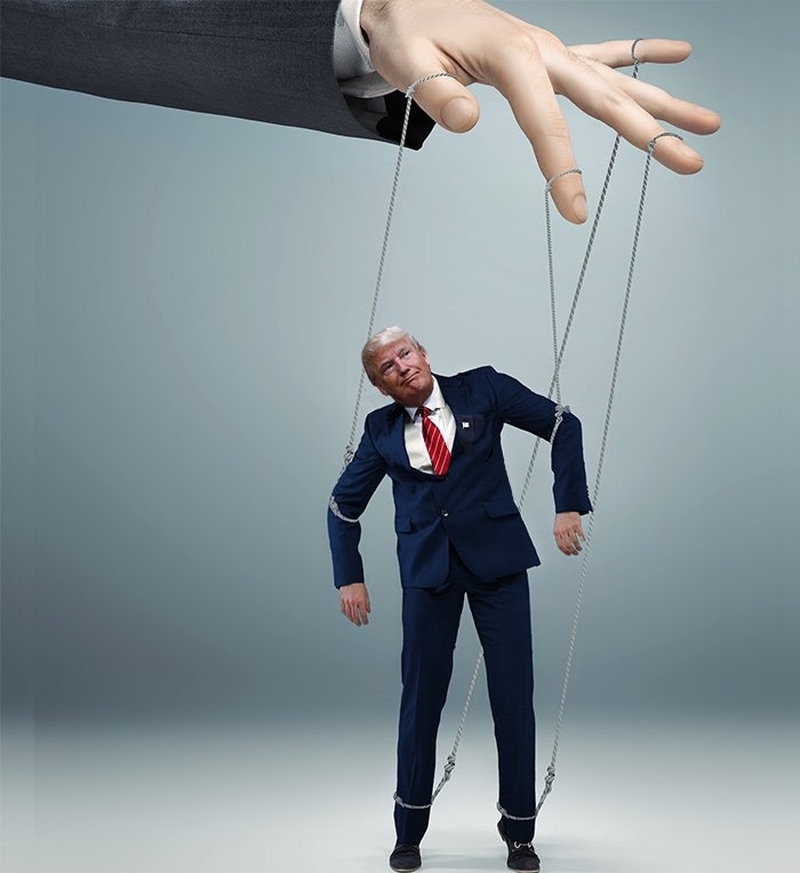 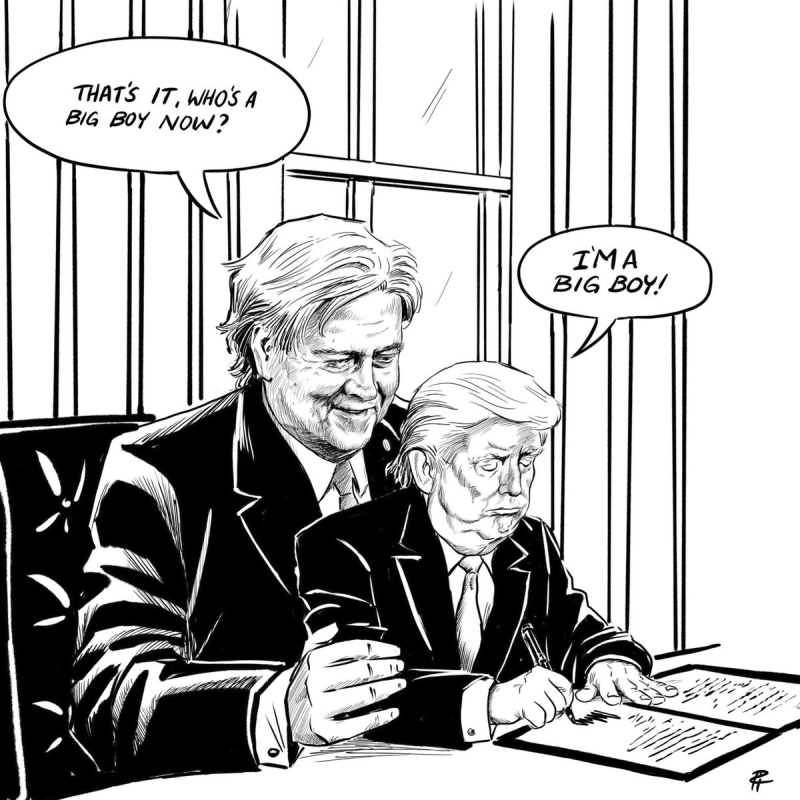 Read about Steve Bannon, the man running the United States as the chief strategist and newest member of the National Security Council, through court documents listing his domestic violence charges.

Is anyone vetted anymore? 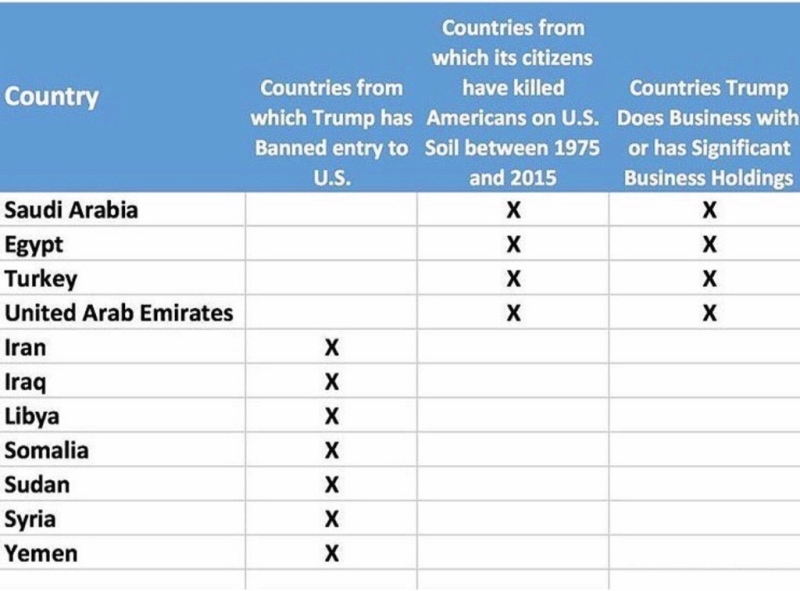 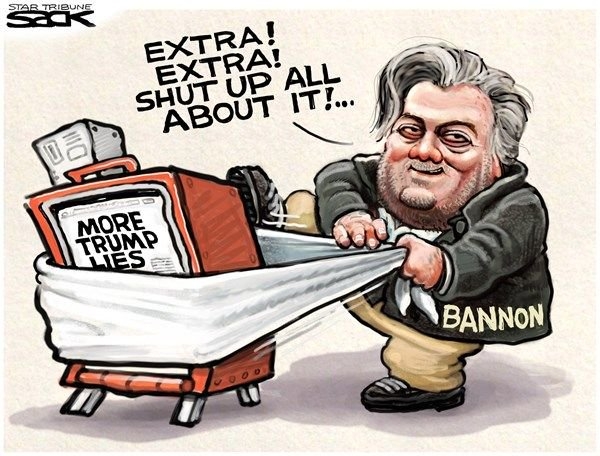 Governor Mark Dayton collapsed while giving the State of the State address before the joint convention of the House of Representatives and Senate at the Minnesota Capitol at 7:46pm this evening.

The Governor had stumbled while arriving and shaking hands at the dais at about 7:07pm. He tried to joke that he shouldn't have missed the run-through earlier today. His speech started with discussing the changes in the past decade and from when he was a boy playing ice hockey in Minneapolis. The soon-to-be-70 year old Governor talked about education for at least 20 minutes. He talked about water and roads and was just about seven minutes into talking about health issues when he reached for his water. He drank, set the water down, and tried to pick up where he left off, but he collapsed and was caught by those nearby. He was eased to the floor. The joint convention was adjourned and the House was adjourned.

Governor Dayton got up a few minutes later, waved to the legislators, and was escorted out of the House chamber.

Music Association: The Beatles - If I Fell

When I recently purchased a bag of oranges, I did not read the label to make certain of the ingredients. I picked up the unimaginatively-named, orange-colored fruit balls. Oranges.

These are not oranges. They're grapefruitranges or grapranges or something.

Some marketing-type wrote a Wikipedia page for Cara Cara Oranges which says “the flavor is more complex than most navel varieties and has been described as evoking notes of cherry, rose petal, orange, and blackberry.” That's a complicated way of saying grapefruit. Rose petals?!? The taste did not evoke rose petals or cherries or blackberries. There was a hint of orange under the grapefruit flavor with the same lycopene-based color as Star Ruby grapefruit.

Cara Cara Oranges should probably be tested for furanocoumarins, the compounds found in grapefruit that interfere with some medications.

And the bags should not say oranges and should not be printed in orange.

Sunkist shouldn't sell something to the people that's orange on the outside, sour on the inside, full of false advertising, and potentially dangerous.

Thank you for your time on this seemingly mundane issue. 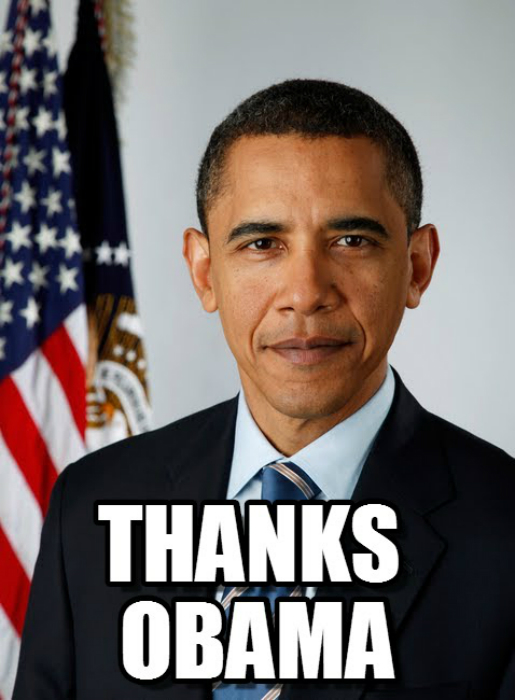 I haven't always agreed with President Obama's politics, but I have never questioned his decency. He raised the bar.

The answer can never be everything. You don't drive and pay attention to everything, despite what billboard advertisers might think.

Robert Pirsig said in Zen and the Art of Motorcycle Maintenance:

All the time we are aware of millions of things around us -- these changing shapes, these burning hills, the sound of the engine, the feel of the throttle, each rock and weed and fence post and piece of debris beside the road -- aware of these things but not really conscious of them unless there is something unusual or unless they reflect something we are predisposed to see. We could not possibly be conscious of these things and remember all of them because our mind would be so full of useless details we would be unable to think. From all this awareness we must select, and what we select and call consciousness is never the same as the awareness because the process of selection mutates it. We take a handful of sand from the endless landscape of awareness around us and call that handful of sand the world.

And from A Study in Scarlet by Arthur Conan Doyle:

I consider that a man's brain originally is like a little empty attic, and you have to stock it with such furniture as you choose.  A fool takes in all the lumber of every sort that he comes across, so that the knowledge which might be useful to him gets crowded out, or at best is jumbled up with a lot of other things so that he has a difficulty in laying his hands upon it.  Now the skilful workman is very careful indeed as to what he takes into his brain-attic.  He will have nothing but the tools which may help him in doing his work, but of these he has a large assortment, and all in the most perfect order. It is a mistake to think that that little room has elastic walls and can distend to any extent.  Depend upon it there comes a time when for every addition of knowledge you forget something that you knew before.  It is of the highest importance, therefore, not to have useless facts elbowing out the useful ones.

In November, someone posted a self-driving car's view of a road, identifying features relevant to driving.

Someone posted a question, very relevant today in Minnesota, how would a self-driving car behave in a snowstorm or on fresh pavement with no markings?

In either case the cars are specifically designed to accelerate and brake randomly while twitching the wheel sporadically in either direction. This sufficiently emulates how most people near me drive in those conditions.