📱 new e-novel Hopes and Dreams: Stuck on AutoDrive
Get into the mind of the inventor of the self-driving car, as he figures out how to steer the future!

Register to Vote in Minnesota

Twin Cities Marathon, US Bank Stadium to Minnesota Capitol (8am)

Booya is thick soup or thin stew, cooked in giant kettles. Boil-ya?  It's a harvest mix of everything the cook decided it should be. A recipe for booya calls for throwing the recipe book into the kettle. Slurp! Mmmm, nothing tastes better than the printed page. 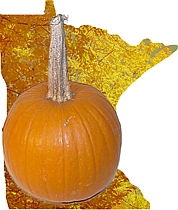 Halloween & Trick-or-Treat 2016 - Twin Cities Calendar
Trick or Treat Hours in Minnesota: There aren't set hours for trick-or-treating in Minnesota.
Maybe it's over at dusk. Or 8pm. 8:30ish. Or when there's no more candy.
Or when Jack O'Lantern's lights are out... Of course, halloween will be completely over by curfew.

Sunset will be at 6pm.

Trick Or Treat Rules
1. Knock on a door or ring a doorbell and yell, "Trick or treat."
2. Open a bag or pillowcase or plastic pumpkin or something else and have them drop candy in.
3. Say "Thank you" and go on to the next place.

Don't stay out past curfew. Don't go into houses (even with a socializing parent). Don't get into doorsill conversations. You've got places to go.

Don't carry a lot of loot. A route that allows you to drop stuff off at home and go back out often, will help you.

Go to houses that are lit up, especially with visible Halloween decorations. If the house looks dark, move on.

Don't waste time (yours or your neighbors). Don't dress up as a magician and beg people to request a Trick. This isn't amateur talent night.

What if there was a trick or treating social app where kids could report to other kids which houses gave out the best stuff and which gave out the worst?!?

Pumpkin Patches  ~~ a very Linus thing to do

Trick or Treat Hours in Minnesota: There aren't set hours for trick-or-treating in Minnesota.
Maybe it's over at dusk. Or 8pm. 8:30ish. Or when there's no more candy. Or when Jack O'Lantern's lights are out. Thursday's curfew is -- 10pm (age 15 & younger) in Ramsey County
9pm (age 12 & younger) in Anoka, Carver, Dakota, Hennepin, Scott, & Washington counties

Need a mask?  Here is a President Obama mask (here's another)