If I could give you everything you want, happiness - entertainment - comfort - nourishment, I would. But you would still ask for more. I know I would. I want Peace on Earth.

Peace on Earth is like shoveling a parking lot of snow. It's a big task, that could use some help... or at least some heavy machinery.

Let's make this clear. Peace on Earth is the absence of war. If there is no war, congratulations, you've got Peace on Earth. Wouldn't that be great?

I don't hear everyone agreeing.

Unlike shoveling a parking lot full of snow, which could be done with a pickup truck and a front-end plow, Peace on Earth needs people power. People make war. Guns and missiles and protective shields don't make war (we'll get back to them). People decide to go to war and fight and kill.

And the reasons are basic, negative emotions -- hate, fear, revenge, and greed. The strongest of these reasons is greed.

The reasons can be covered up by religion, but no major religion is based on hate, fear, revenge, or greed. Religions are better than that. Or they should be.

The reasons are covered up by defense, which also should be better than war, but the most effective defense is a good offense.  That makes offense and defense functionally the same thing, despite the fact that countries don't have a Department of Offense.

And the reasons for war are covered up by words. War is sugar-coated in words and propaganda. Words can rally up the basic, negative emotions in people, outshouting Wellstone-like cries for peace. Words can veil realities in generalizations, stereotypes, over simplifications, and foregone conclusions.

Wars cannot be fought to end war. You cannot have a "War to end all wars" or a "War on terror" or even a "War on wars." It's all still part of the proliferation of war. Fighting will not stop war. The exception, of course, is nuclear annihilation, which would kill everyone and most everything. The cemeteries are full; we cannot fight. That's one way to get Peace on Earth, but not the way most people want.

Too often, people fight wars because war is thought to be their only hope. That's nuts. War is a hell, not a hope. But people think that they do not have other choices.

None of the alternatives are easy, but then neither is war. In war, a big bad bully of a nation can pick on a much smaller, weaker nation because the battle is thought to be easy. But then an alliance of nations can form overnight to defend the weaker nation. There are no easy wars, and there are no clean wars. Innocent people get hurt and killed in war.

Getting to Peace on Earth means stopping war and preventing war. If war is the escalation of negative emotions, it is easier to consider the alternatives to war before the first shots are fired. Wars are preceded by failed alternatives.

There can be architects for peace. War only has demolition experts with new weapons that will better distinguish the enemy from the innocent, which was the justification for all previous weapons. 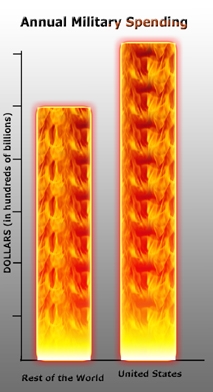 We must guard against the acquisition of unwarranted influence, whether sought or unsought, by the military-industrial complex. The potential for the disastrous rise of misplaced power exists and will persist... Only an alert and knowledgeable citizenry can compel the proper meshing of the huge industrial and military machinery of defense with our peaceful methods and goals, so that security and liberty may prosper together.               - President Eisenhower 1-17-1961  YouTube

War costs lives, liberties, security, and money. Lots of money. People could get rich on war.

How much money, annually? China spends $65 billion (2nd highest). Russia spends $50 billion (3rd highest). France spends $45 billion (4th highest). The world spends $500 billion, not counting the U.S. The United States spends $650 billion. And the $650 billion disappears quickly. We haven't been the alert citizenry that Eisenhower wanted us to be.

Thousands of companies profit on military spending. Here are the most expensive U.S. contractors:


Who doesn't want Peace on Earth?

Losing the War on Peace Presidents Lyndon Johnson (D) and George W. Bush (R) were both afraid of losing their quagmire-like, civil-guerilla wars during their presidencies. There should be a word for that, a Johnson-Bush. A Johnson-Bush is a president who will keep fighting a pointless, goal-less war that cannot be won... which couldn't bother the military-industrial complex, since a long-term, goal-less war is a treasure chest to them.

Presidential ego is a barrier to peace. The president is afraid of being remembered for losing a war. In the case of Johnson, it's weirder because he was afraid of losing the Vietnam War, and he was afraid of winning the war. He was afraid of it escalating into a nuclear confrontation against the Soviet Union and China.

Economists say that war is good for the economy. Ecomonists get a lot of things wrong like that. War is not good for an economy or its people. Wars like the Iraq War II increase the national debt at a staggering rate to fund the military-industrial complex. Which makes you wonder, why have a war at all? Why not just funnel money to the military-industrial complex without a war? Well, someone might reply that there needs to be a reason... like the reasons for the Iraq War II. If anyone ever says that "war is good for the economy," the correct response is "no, pillaging and plundering are good for the ecomony."

War is where people lose.

Fighting for Peace on Earth

Peace on Earth is something everyone wants, but no one wants to fight for.

It doesn't make much sense to fight for Peace on Earth, but if Peace on Earth matters, shouldn't something be done to achieve it? Eisenhower called for "an alert and knowledgeable citizenry" to balance the machinery of defense with peaceful methods and goals. That's not exactly Peace on Earth, but maybe it's close.

How do you get Peace on Earth? You argue for it. You listen to those arguing for it. You work on it. You work on the alternatives. You delay war. You help a president accept a Johnson-Bush and move on. When economists say that war is good for the economy, you tell them they are confusing war with plundering. You talk the military-industrial complex out of the push for war, as an employee or a stockholder or as a concerned citizen. You promote facts over propaganda. And you emphasize that you can be a patriot and can stand for peace.