The stories below didn't mention the sources of the bad olive oil (Tainted Olive Oil) or the bad honey (That's Not Honey, Honey). The worst “olive oil” (and some of the best) came from Italy. The worst “honey” was coming from Chinese suppliers.

This third edition of Food Fraud is about rice from the south-central United States. 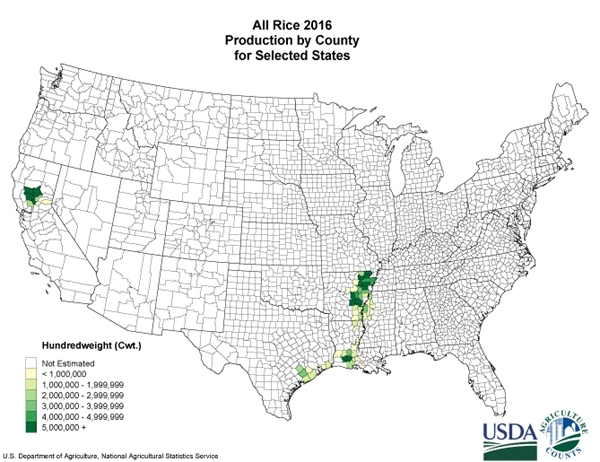 Rice grown in the United States contains an average of 1.4 to 5 times more arsenic than rice from Europe, India and Bangladesh, according to a 2004 international rice survey of world grains reported in the journal of Environmental Science and Technology.


Rice crops failed to grow in former cotton fields due to an arsenic-induced disease known as straighthead (Oryza sativa L.). Straighthead-resistant rice varieties were bred (and field re-flooding techniques developed) enabling rice to withstand the legacy arsenic and appear healthy (Nature). Most rice consumed in the U.S. is domestically grown, half of it is exported, and more than half of U.S. rice is produced in Arkansas.

While there are no arsenic-food safety standards in the U.S., the federal limit of arsenic in water is 10 ppb (parts per billion). In New Jersey, the arsenic limit is 5 ppb in water.


I read about the Consumer Reports survey back then, got disgusted, and read the bag of rice in my kitchen: Roberts A-1 Rice from Riceland Foods, Stuttgart, Arkansas. Roberts A-1 Rice was never listed in the Consumer Reports survey, but coming from Arkansas was enough to make me switch brands to one that specifically says, “California Grown.”Music Association: Coldplay - Scientist
Movie Association: Arsenic and Old Lace

If you mouth the words Olive Juice to someone, it looks like you are saying I Love You but you aren't.

Oils labeled as Extra Virgin Olive Oil (EVOO) were found to be mostly soybean oil in an April 2007 olive oil bust. Australia tested all of its olive oil brands in 2012 and none were certified as pure olive oil. And in 2008, Italian police seized 85 oil farms which were mixing chlorophyll to sunflower and canola oils and labeling it as EVOO.

Olive oils for 186 brands were tested using chemical and sensory tests through the Olive Center at the University of California - Davis in a year-long study reported in 2011 and 2010.  About 70% of the olive oils failed to meet the proper ratio of diacylglycerols. International Olive Council (IOC) sensory tests were failed by 73% of the olive oil brands.

The UC-Davis tests concluded that olive oils had been hydrolyzed, oxidized, fermented, and adulterated with cheaper oils.

Olives and olive oil are “excellent sources of oleic acid, an omega-9 monounsaturated fatty acid” and “have many unique phenolic and aromatic compounds, including oleuroprein and flavonoids.”*


I can eat anything. Spicy food. Old shoe... anything. I'm part goat. Over time I have become more selective about food.

Honey is a super-food. It has antioxidants – phenolic compounds.* It can heal wounds.* It is energy-enhancing.* And some of the honey at the store is not honey.

Honey is being adulterated with cheaper (and very not-super) ingredients like high fructose corn syrup (HFCS), corn syrup, sugar, molasses, illegal antibiotics, and other substances. The FDA has issued several alerts. The latest FDA alert was issued September 20, 2016:  “The presence of cane or corn sweetener in the adulteration of honey can be selectively detected by using the internal standard stable carbon radioisotope ratio method. Reference for the appropriate analytical technique is published in the Official Methods of Analysis of AOAC International, AOAC Official Method 991.41, C-4 Plant Sugars in Honey.”

There you go, that's how you'll know if you have adulterated honey.


Here is a 2012 infographic describing ways anyone can test their own honey: 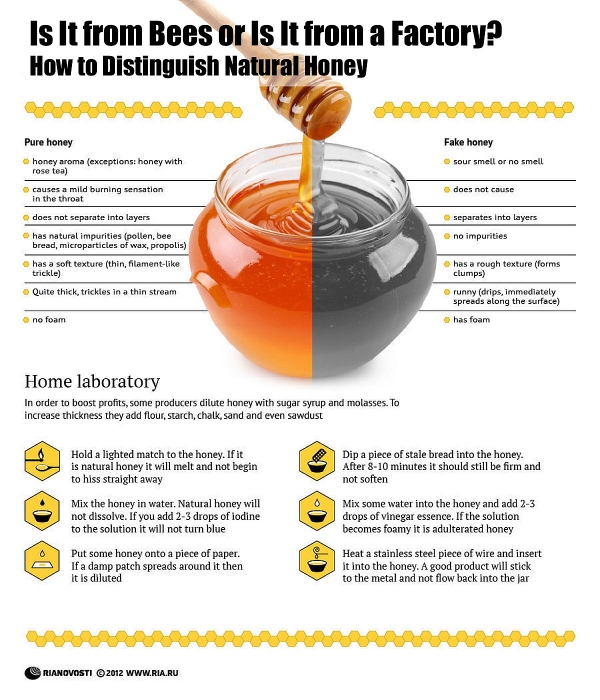 “Is It from Bees or Is It from a Factory?  (Click the image for a larger size. Here is the original Russian version.)How to Distinguish Natural Honey

Fake honey
•  sour smell or no smell
•  separates into layers
•  no impurities
•  has rough texture (forms clumps)
•  runny (drips, immediately spreads along the surface)
•  has foam

Home laboratory
In order to boost profits, some producers dilute honey with sugar syrup and molasses. To increase thickness they add flour, chalk, sand, and even sawdust.

•  Hold a lighted match to the honey. If it is natural honey it will melt and not begin to hiss straight away.
•  Mix honey in water. Natural honey will not dissolve. If you add 2-3 drops of iodine to the solution it will not turn blue.
•  Put some honey on a piece of paper. If a damp patch spreads around it then it is diluted.
•  Dip a piece of stale bread into the honey. After 8-10 minutes it should still be firm and not soften.
•  Mix some water into the honey and add2-3 drops of vinegar essence. If the solution becomes foamy, it is adulterated honey.
•  Heat a stainless steel piece of wire and insert it into the honey. A good product will stick to the metal and not flow back into the jar.” 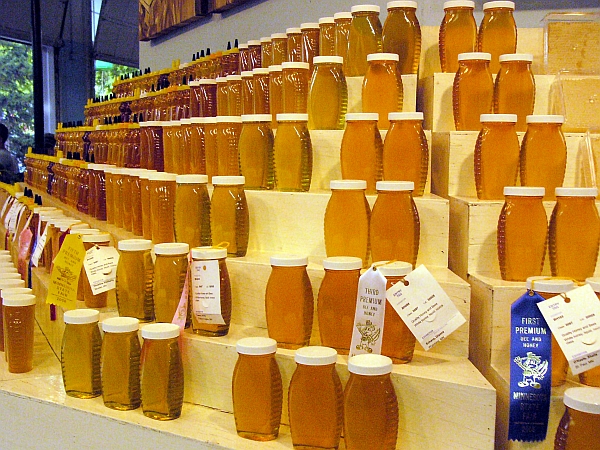 Most store honey is not what is produced by bees, reported Food Safety News in 2011. “The FDA says any product that’s been ultra-filtered and no longer contains pollen isn’t honey. However, the FDA isn’t checking honey sold here to see if it contains pollen. Ultra filtering is a high-tech procedure where honey is heated, sometimes watered down and then forced at high pressure through extremely small filters to remove pollen, which is the only foolproof sign identifying the source of the honey. It is a spin-off of a technique refined by the Chinese, who have illegally dumped tons of their honey – some containing illegal antibiotics – on the U.S. market for years.”

Music Association: The Beatles - A Taste of Honey
Twin Cities Calendar:  Get more bee information at the Native Plant Sale on Saturday, June 3, 2017 or at the Pollinator Party on Thursday, July 27, 2017 or at the Minnesota State Fair (August 24 - September 4, 2017).
* Michael Murray, The Encyclopedia of Healing Foods, p 648-655.


Minnesota has the measles.

The outbreak can be attributed to unvaccinated travel (out of the country or into the country).

Quotations
Zen and the Art of Motorcycle Maintenance
April 25, 2017


Minneapolis-born Robert Pirsig, author of Zen and the Art of Motorcycle Maintenance, died yesterday. He was 88.

Zen was rejected by 121 publishing houses before it was published in 1974. Here are some of my favorite quotes from the book:

The division of the world into parts and the building of this structure, is something everybody does. All the time we are aware of millions of things around us... these changing shapes, these burning hills, the sound of the engine, the feel of the throttle, each rock and weed and fence post and piece of debris beside the road... aware of these things but not really conscious of them unless there is something unusual or unless they reflect something we are predisposed to see. We could not possibly be conscious of these things and remember all of them because our mind would be so full of useless details we would be unable to think. From all this awareness we must select, and what we select and call consciousness is never the same as the awareness because the process of selection mutates it. We take a handful of sand from the endless landscape of awareness around us and call that handful of sand the world.”

“I'm no more comfortable than they are in this heat but there's no point in dwelling on it. All day while I've been thinking and talking about Phaedrus they must have been thinking about how bad all this is. That's what's really wearing them down. The thought.”

“The place to improve the world is first in one's own heart and head and hands, and then work outward from there.”

“You want to know how to paint a perfect painting? It's easy. Make yourself perfect and then just paint naturally. That's the way all the experts do it. The making of a painting or the fixing of a motorcycle isn't separate from the rest of your existence.”

Music Association: The Beatles - The Long and Winding Road